Finding Motorcycle Glory At The Mint 400

“When the impossible needs to be suspended, FOX provides a solution.” From victory with Tom Sneva at the Indianapolis 500 in 1983 to victory with Jordan Graham at the Mint 400 in 2020, FOX athletes win with panache.

With Graham, it began as a simple conversation between three friends after Christmas 2019. When the topic of racing the Mint 400 on a custom Scrambler Ducati Desert Sled came up, the stars aligned and Graham — a longtime FOX athlete — was slotted to race with teammate Ricky Diaz in the barren landscape outside Las Vegas on March 6.

The Spider Grips crew of Michael Larkin, Paul and Becca Livingston — known for building several Pikes Peak Hillclimb-winning Ducatis — were once again chosen by Ducati North America CEO Jason Chinnock to work their magic for the Mint 400, which was to be filmed by Fasthouse. The objective was to show the Desert Sled in its true environment. This was meant to be a visual feast, where victory wasn’t the objective.

Apparently, Graham had other plans for his day.

Racing a 500-pound motorcycle at speeds topping 100 mph over 160 miles sounds daunting, but it’s been Graham’s dream to compete in the toughest desert race in North America. As a seasoned hooligan and motocross racer, he was no stranger to pinning it; the Mint 400 poses as much of a mental challenge as physical.

At 7 a.m. on Friday, March 6, 87 riders toed the line in Class waves for the second year of the National Hare & Hound motorcycle race. Graham (#47), Diaz (#51) and teammates Alexander Smith and Michael Allen (using numberplate #5 in honor of Carlin Dunne, who died during the 2019 Pikes Peak Hillclimb Challenge), entered the Hooligan Open motorcycle class on their FOX-equipped Scrambler Ducati Desert Sleds. After two brutal laps, which saw 10 DNFs and 25 riders pulled after the first lap for not making the time cut, Graham took the checkered flag in 4:45:35. He crossed the finish line 45 minutes quicker than Allen in second place.

“The Scrambler Ducati was great, it tracked through the sand washes perfectly and on the open stretches we were blasting past the 450 enduros,” Graham said. “It’s a brutal, fun course and the Desert Sled soaked up a real beating. I’m stoked to get this win for Fasthouse, Scrambler Ducati and the Spider Grips team.”

“A win at the historic Mint 400 is a great achievement, made all the more exciting due to Scrambler’s connection with the spirit of off-road riding in the deserts of the Southwest,” Chinnock added. “Both the Scrambler and the Mint 400 story began in the 1960s, so it made sense for us to come together again for the exciting new Hooligan Class.”

With a compressed timeline, the FOX team got busy measuring and testing the stock Desert Sled shock in mid January, and after consulting with Spider Grips, developed three custom race shocks for the three Desert Sleds.

“I started working on the custom FOX shock for the Scrambler Ducati Desert Sled when we received the stock KYB shock from Ducati North America in January,” FOX motorcycle applications engineer Ian Lebov said. “I measured its dimensions, spring rate and damping forces; I knew we had to lengthen the shock travel by 0.7″ to get the extra two inches of wheel travel.”

We were confident in Jordan’s ability on the bike. Seeing him smoke the competition by 45 minutes was gratifying.” 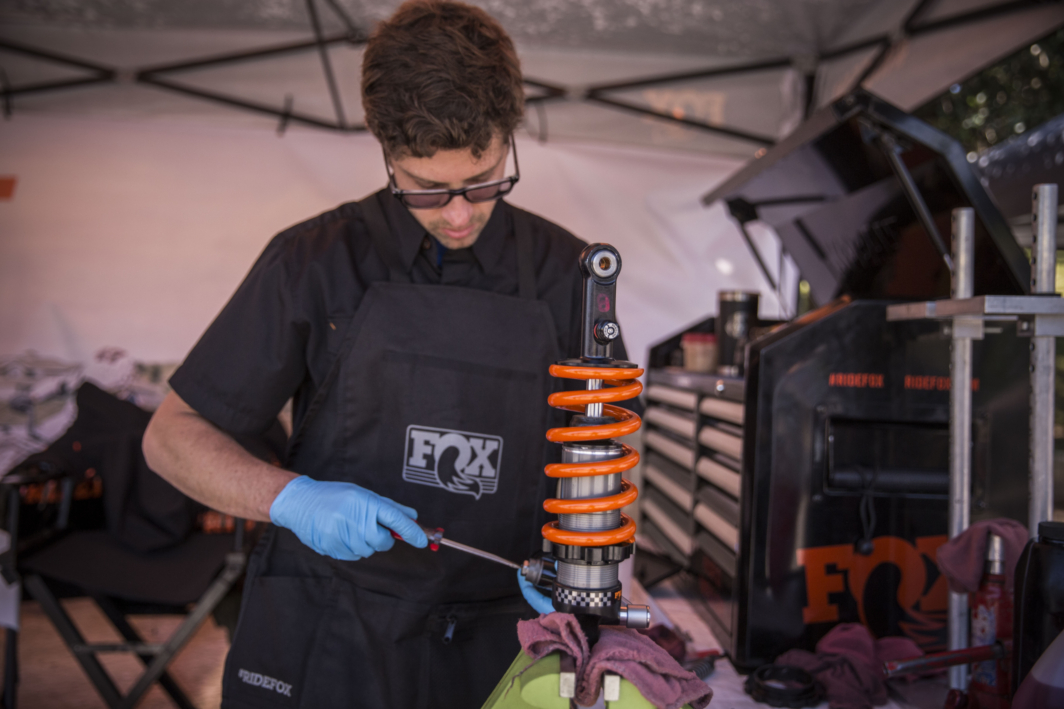 “The stock damping forces were way too high on rebound which I knew wouldn’t be fast in the desert, since our bumpy street tune on our stock Scrambler 800 mono shock had much less damping, so I decided to keep our regular Scrambler valving in the desert racing shocks.

What is FOX Academy?

“The Desert Sled racing shock needed to increased total length by 1.4 inches, so my on-hand springs would be too short,” Lebov added. “As we’ve done for other racing applications, I ordered four different spring rates from Eibach to account for the extra travel, sag and support needed. I also ordered the longer bodies and shafts from our machine shop on February 3 to lengthen some stock Scrambler 800 shocks we had in inventory.

“The stock KYB piggyback shock got smoking hot when it was on our dyno. Not knowing how hot these shocks were going to get, I also ordered and installed some thermometer strips for the teams to be warned if the shocks approached 250 degrees F which is hot for this type of shock.”

“The race was the first Friday in March, and we built and shipped three shocks to the Ducati team on February 14,” Lebov said. “All told, our team took less than a month to develop and ship three shocks to the Spider Grips team. We were confident in Jordan’s ability on the bike. Seeing him smoke the competition by 45 minutes was gratifying.”

Our friends at Fasthouse have been developing groovy content for several years, and the 2020 Mint 400 was an ideal playground to capture the magic and mystique of desert racing. And due to the COVID-19 pandemic, it was the last big race we could enjoy before the world shut down for a few months.

Sit back, pop open an 805 beer, and enjoy the film. Motorcycle legend (and father of Alexander Smith) Malcolm Smith makes a brief cameo toward the end at 9:33: